We left off the other day with Corey spinning a few hundred million stem cells through a medical crazy straw. If you’ll remember, he responded astoundingly well to the growth factor shots and had a superhuman amount of stem cells and a white blood cell count that was through the roof. They were shooting to collect approximately 112,300,000 stem cells during a five-hour collection period (they can actually count the number of stem cells they collect, something I cannot even begin to wrap my mind around). When we left, they told us they’d call Monday morning to let us know if they’d collected enough or whether he was going to have to go back for a second collection, which is pretty normal.

Claudia had a definite note of laughter in her voice when she called Monday. Not only had they collected enough stem cells that we were most definitely not having to go back for a second collection, but they had, in fact, ended up with somewhere north of 490,000,000 stem cells – enough for something like 10 transplants!

Corey ended up having nine days of growth factor shots in the 10 days preceding his collection. That’s a lot. In all of our conversations leading up to the shots, they said he would get two to four days of shots. They do lab work every day to monitor your levels and, best I can tell, they got off to a slow start, and then went gang busters for a couple days, resulting in that extreme pain he went through in the hospital. He continued to get the shots through all of that too, and when they were finally able to collect, it was like someone opened the overflow valves on a huge reservoir!

So here we are, after the big collection, and, well, we’re in kind of a holding pattern…

We met with our team on Tuesday (oncologist, physician’s assistant and nurse) and, while they were excited that we’d been able to “collect” and that Corey’s numbers looked good, they did have some concerns. You may need to refer to some of my previous blog posts for the details, but I’ll give a brief recap here:

Corey’s latest bone marrow biopsy showed that the cancer was still present in 10-15% of his bone marrow. They need it to be below 5% for the transplant (I write about this in “Chunky Gold & Tattered Capes”). They decided to give him an extra round of IV chemo for 5 days in hopes that this would drive the number down below 5%. They were going to give him a more aggressive chemo regimen than he was previously getting, hoping it would shock his body and really kill off that last bit of cancer before heading into the transplant. When we arrived for the IV chemo, they first performed an echocardiogram because two of the seven chemo drugs he was scheduled to receive have heart risks, so they check the heart to make sure this won’t cause a problem. His heart function came back just below normal so they had to change up the chemo regimen. They wanted us to follow up with a cardiologist who specializes in chemo/cancer patients after he was released from the hospital (I write about this in “‘Forget all the Plans’ World Tour 2018”).

So here we are, post-chemo, post-growth-factor, post-collection, and our oncologist, Dr. Eagen, is in a quandary. He’s not entirely convinced that the chemo Corey ended up getting that week in the hospital was strong enough to get the cancer down below the 5% mark. He was confident that the original regimen Corey was supposed to get that week would have killed it off, but wasn’t as confident that what he ended up getting would do the trick. He’s concerned because between the end of Round 5 of chemo (June 30) and the start of the transplant process (August 31), the M-spike (or bad proteins) in Corey’s blood, which had been undetectable at the end of Round 5, are present again. We’ve also recently discovered that Corey has a more aggressive strain of cancer than previously thought. (All of these details are in previous blog posts if you want to read more about them.) So between the more aggressive strain and the M-spike returning so quickly in that window of no treatment, he just thinks we may not be where we need to be heading into transplant. He’s decided to wait to see what the cardiologist has to say and, in the meantime, consult with a few of his colleagues and get their thoughts. (I really do love the spirit of collaboration I see among all the people here.)

Speaking of the cardiologist, we met with him today and he was great. I’ll spare you all the details of the appointment (mainly because it’s 3 AM and he used a lot of big, medical-y terms that I can’t recall and don’t really understand), but the bottom line is, Corey’s heart ultrasound came back great, his EKG came back great and all of his heart functions almost all look normal. Their concern, with the one area showing just below normal, is whether or not the cancer has impacted his heart. I asked if it was the chemo that could have possibly impacted it, or the cancer itself, and, with the particular function that has been impacted, they’re wondering if the actual cancer protein is present in his heart. Apparently this type of cancer can impact your organs. He’s ordered a cardiac MRI (hopefully to be performed next week) that will be able to tell whether the cancer is in his heart.

So here’s where we are: Dr. Eagen is consulting with his colleagues and waiting for the results of some lab work that will show whether the M-spike (or bad protein) decreased after this last round of chemo. He’ll also consult with Dr. Yang, the cardiologist, who will let him know he’s ordered a cardiac MRI. The two of them will discuss the findings of that just as soon as they come back. I’m also pretty willing to bet Dr. Eagen will order another bone marrow biopsy so he can be more sure of whether Corey’s fallen below the 5% threshold. The bottom line is, we need to go into the transplant in the most optimal condition possible. Are we praying that Corey, who has responded to everything else way better than they thought he would, responded better to this last round of chemo than they expect? You bet. And if not? Well, we’ll cross that bridge when we get there, but, whatever the next step looks like, we know where our true hope lies and in Whom we rest.

Speaking of rest, we’re in a bit of a holding pattern because of all this, and our team has given us the biggest possible gift this weekend. They let us go home! Corey’s counts are still boosted (they’re coming down now, but are still over their threshold) so, as long as we promised to be careful and get in right away if there’s any sign of a problem, they moved things around and built in a couple days of downtime. We didn’t tell the kids, in case we didn’t get the final OK, and we were able to surprise them tonight when they got home. Oh man, it was the best ever and my heart is f-u-l-l!

So, if you’ll excuse me, I’m gonna go get some midnight cuddles in with my little Abbie girl, who’s curled up next to me.

Oh who am I kidding? She’s kicking me in the ribs and elbowing me in the face and is the reason I’m awake at 3 AM! Oh well, I’ll still soak up every minute of it – even if I do have to have an ibuprofen with my coffee in the morning… 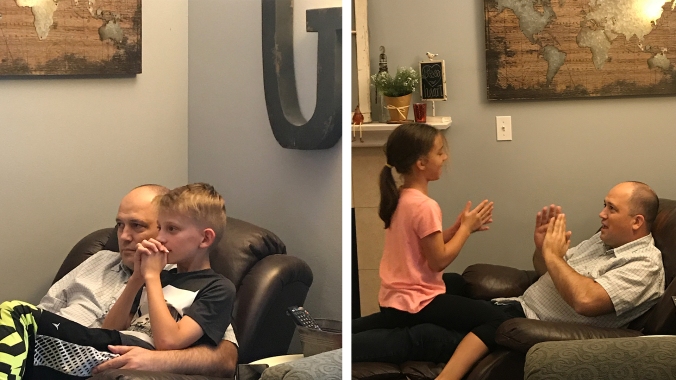