There are mountain people, beach people, city people and country people.  I’m a beach girl.  I love everything about the beach.  Some of my favorite memories from when I was a kid are from when we’d go to Southern California to visit my dad’s grandparents.  I remember chasing sunsets down the Pacific Coast Highway, burying ourselves in the sand, picnic lunches with hot, fresh loaves of sourdough bread…  I love everything about the sights, sounds, and smells of the Pacific.  So when a very special family friend reached out a few weeks ago wanting to bless our family with the use of their beach house in Anacortes for Mother’s Day weekend, we (excitedly and gratefully) accepted their offer.

One of the things I love so much about this part of the Pacific Northwest is that there’s water everywhere.  It’s not the mighty, crashing waves of Southern and Central California like I’m used to, but the gentle lapping tide of the PNW is still powerful and soothing to my soul.

Corey’s 2/3 of the way through Round Two of chemotherapy and things are going well.  He had to have extra blood work done last week because of his kidney function being down, and his results came back smack dab in the middle of normal range.  His numbers for this particular test are looking better than they have since February, which is great news!  Between that and his proteins heading in the right direction, we’re super encouraged at his progress.

Being at the beach always brings introspection and it made me think of life since Corey’s diagnosis.  The vastness of the “C” word and the potential dangers and fear it can stir up are as great and powerful as the Pacific itself, but our journey so far has resembled the gentle lapping tide of the PNW: his test results go a little up, then a little down, then a little up, then a little down – and I suppose that’s better than them crashing mightily like those So Cal waves (which have driven me face-first into the sand more than once).

It was a sunny, beautiful, wonderful weekend (what weekend at the beach isn’t?), but I’ve discovered that I still have a lot of work to do on grabbing the right cape (the one the color of “letting go”) and, perhaps more importantly, keeping my hands off of the “Do-it-all-right-and-do-it-all-right–now” one.  Watching Corey with the kids this weekend made me appreciate his ability to do that.  I’m working – hard – on learning from him in that respect.

These photos from this weekend perfectly capture my little family.  Abbie is always tumbling about, and Jayden loves to build and loves to be by his dad’s side, which, if we’re at the beach means flying a kite.  It’s a thing we do: the beach = kites.  I don’t know that I’ve ever been to a beach with Corey without him having kites in tow.

Corey & Jayden in the background flying kites; Abbie upside down, and smiling – as usual.

Jayden adding to a cool driftwood fort he discovered, and preparing for a kite battle with Dad.

They’re beautiful, aren’t they?  This time away was a great reminder to just breathe and to soak in every precious moment.  I have to stop letting the enemy of my mind and soul tempt me to grab for the wrong cape.  Instead, I have to remember that in this cape tug-of-war the wearer of the Savior-of-the-World cape wants me to know peace and joy and fulness in this life of mine, and with these people of mine.

They’re gifts.  Both the people, and the moments I get to spend with them.

So instead of me being bothered that the TV was on (yes, sadly I would have been bothered by that in getaways past), I chose to soak up the cuddles and every laugh-out-loud moment of our I Love Lucy marathon (and I was reminded that Abbie has the. best. laugh!).

Instead of pushing to complete the hike we started, we happily and lazily turned back – and came upon a mama deer and her brand new fawn.  A true Mother’s Day treat we would have missed by pressing on.

Corey was playing “Home” by Phillip Phillips as we waited out the sunset one night.

I love this song and the lyrics struck me fresh this time:

“Hold on to me as we go
As we roll down this unfamiliar road
And although this wave is stringing us along
Just know you’re not alone
‘Cause I’m going to make this place your home.”

The thing about holding on to someone while they’re walking down an unfamiliar road is that your hands won’t be free to hold on to if they’re full of stuff that doesn’t matter.  And I’ve decided that making “this place,” which is any place I’m with them, home, is all that matters. 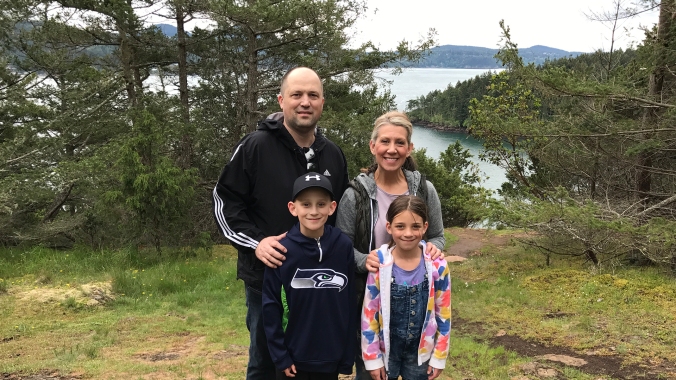 My big takeaway from this weekend was a fresh commitment to free hands.  To enjoying the moments, the gifts, that are the people in my life, and to letting go every other thing that would pull at me like the tide.

9 thoughts on “Here’s to Free Hands”