We left off with Wednesday being a transitional day and the ICU team working with Corey’s oxygen levels, hoping they could try to wake him up and attempt some breathing trials. The began weaning his sedatives early Wednesday morning and began turning his oxygen down late morning/early afternoon to see how he would respond. He started “waking” a little big, although he was never conscious enough to make eye contact or know what was really going on. It was just enough for his body’s natural mechanisms to kick in and his lungs to start trying to pull oxygen in on their own. Unfortunately, it didn’t go really well. His heart rate started climbing pretty high and he began fighting the machine and trying to pull in more oxygen than his damaged/sick lungs could really tolerate. After just a few minutes they turned the sedatives back up so they could get him to relax and get the rest of his numbers to normalize.

They hoped to try again Thursday but his numbers were just not conducive. He’s been running a fever of 102-103 for 3 days now, which increases his heart rate, not a good combination for a breathing trial. Instead, they increased the volume of oxygen going into his lungs and changed up the sedative to make him more comfortable. His breathing Thursday looked far less mechanical than it did Wednesday and that made me feel a lot better. They also brought in a mechanical cooling blanket that was hooked up to what looked like a portable air conditioner so they could work on getting that fever down.

I had a meeting Thursday morning with Corey’s care team about where he is, what options we have for what’s next and his outlook in general. The breathing tube can stay in for a maximum of 14 days. We’re on day 8. They’re almost certain at this point that the cause of this whole episode is toxicity to the chemo he’s been on and that it caused damage to his lungs. I say almost because all other tests have come back negative and the only way to know for sure is a biopsy, which Corey isn’t strong enough for. So with a weakened immune system, the combination of toxicity and a bad pneumonia brought this on quickly and severely. Fortunately, the toxicity issue was on the radar of the attending physician in the ICU the night Corey was brought in so he’s been treating for that and the pneumonia, so it’s not like we’re behind the 8-ball on that front. The palliative care physician in our meeting today said that chemo toxicity is like that, your body says, “Yep, yep, yep…” and then, “NOPE!” and a switch flips and things get very bad very quickly. She said she understands it’s very sudden for us, but they see this with chemotherapy patients and this isn’t anything we could’ve seen coming or would have known to brace for.

From a cancer standpoint, the bummer thing is that it appears to be the one chemotherapy drug his cancer really responds to. So if he does pull through this, what does that mean for how we treat his cancer?

There are So. Many. unanswerable questions.

I felt it was really important today to bring the kids to see their dad. They haven’t seen him since they put him in the medically induced coma early Sunday morning and I know they miss him like crazy. Our amazing nurse Megan worked to make him look comfortable and not so mechanical and my mom, who’s back and staying with the kids while I stay at the hospital with Corey, brought them over as soon as they got home from school. They always ask if he can hear them and we tell them yes and encourage them to talk to him. They talked to him and we sat around talking for a while and a couple of the care team nurses and doctors came in to talk to the kids. They were amazing. They explained all the machines and what all the numbers meant, they sat down next to them and answered all of their questions (mostly Abbie, Jayden was pretty quiet), and Megan even let them use her stethoscope so they could listen to his lungs and heart.

After a little bit I called them over and knew I needed to let them know how serious things were. I told them that the doctors and nurses (all of whom have been a-mazing) are fighting with every single tool they know of to help Dad get better. That, along with a bajillion people praying for him was a good combination. And we will never stop fighting and we will never stop praying for and believing for a miracle… BUT… that if Jesus decided He needed Dad up in Heaven more than we needed him down here, that we had to be OK with Jesus taking him. That it’s not at all what we hope for, but if that’s what Jesus thinks is best, then He must really think a lot of us and know that He will be able to give us every tool we need to live here without Daddy. It went about like I expected it to, and there were lots of tears and questions and objections and we walked through it as best we could. But how in the world do a 9 & 11 year old hear that and not have their hearts break? I reminded them that the words, “Blessed are those who mourn, for they will be comforted” are not just words on the page, but that that’s what the Holy Spirit’s main job is! He is our Comforter, and it’s OK to cry, get mad, question and feel every emotion as it comes, but that ultimately we have to trust in God’s sovereignty and that He is good – even when life hurts like crazy.

Abbie wanted to go home after a bit so my mom took her home and they had some good conversations about Heaven and how we can trust that what Jesus says is true and real and unchanging. Jayden stayed and he and I had some great conversations too. He is such a deep thinker and a processor like his mama and I knew he needed that extra time. Corey’s brother and sister-in-law came to pick him up and take him home after a couple hours and when he was getting ready to leave, I had him pray with his dad. His prayer was so real and perfect and genuine and made me weep, with sadness and with pride. He prayed for his dad to be healed and to get back on his feet, and he ended his prayer with these words: “Jesus, we don’t know what’s going to happen, but no matter what, this whole household will always serve you.”

There’s really nothing more to say tonight. My heart is full and broken, all at the same time. 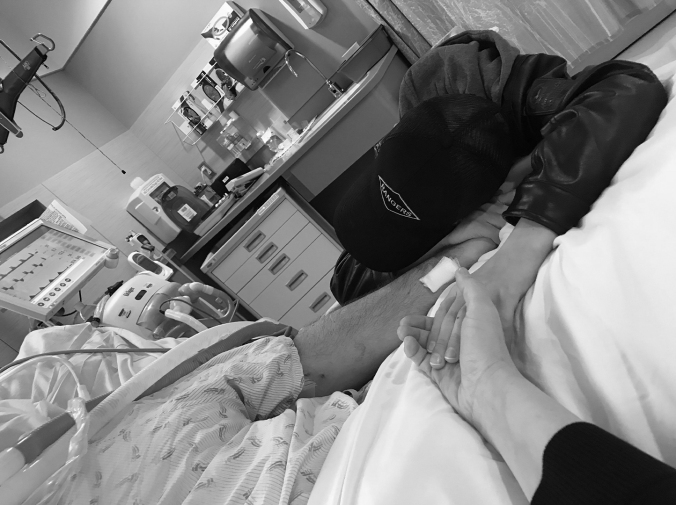 10 thoughts on “No Matter What”