…no pun intended, since this kind of cancer is, you know, in the bones.

I’ll let you guess which way it went.

In all fairness, it wasn’t as bad as it could’ve been.  Corey’s official diagnosis is Stage 2 Multiple Myeloma.  MM is a blood-borne cancer, similar to leukemia, that has three stages, where most cancers have four. Because this isn’t the type of cancer that has tumors, “staging” is different than it is with other kinds of cancers.  Corey’s at Stage 2.  Stage 3 would’ve meant multiple lesions throughout his bones, but his bone scan came back really good.  There are two areas showing signs of weakness, but there are no lesions to be seen.  I’ll interject an emphatic “hallelujah!” here.

The bone marrow biopsy (for a chuckle, see my previous post entitled Tattoos & “Told-You-So”s) held the not-so-great news.  (And I quote…) “70-80% of your bone marrow is loaded with Myeloma.  There’s definitely a lot in there and we need to get crackin’.” 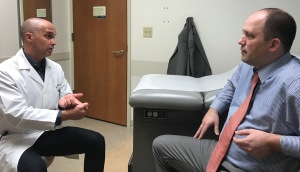 After a long sigh to let it settle in, I flipped the mental switch to, “Buckle Up” mode.

We start chemotherapy April 6th.  We.  Kinda like when a man announces “We’re pregnant!”  Not really we at all, but we in the broader sense of the word.  Corey starts chemotherapy April 6th, which is exactly 30 days from our first appointment with Dr. Lukas.  I still don’t think I’ve fully processed this whole thing, but buckle up; here we go.

The treatment is not a “standard” chemotherapy, if there is such a thing, but a 3-drug regimen that’s a combination of a chemotherapy drug, a steroid and an immunotherapy drug meant to kill the cancer and boost his immune system all at the same time.  Depending on how his body responds to the treatments, this could be anywhere from a 4-8 month process.  The goal of this round of chemo is to kill off the Myeloma and get his bone marrow to a 0% reading.  Once that is achieved we enter phase 2, which is much more aggressive.

In phase 2, they’ll extract a bunch of Corey’s healthy/treated bone marrow and hit him with a super aggressive round of chemotherapy, during which they’ll reintroduce his healthy bone marrow back into his own system.  It’s called auto-transplantation and it’s a stem cell kind of “transplant,” only its his own bone marrow they’re “transplanting” so there’s no risk of rejection.

This process was developed about 50 years ago by researchers at the University of Washington and they actually won Nobel prizes for it.  Amazingly cool that this is in our own backyard.

This phase is where his body and immune system will be at their lowest.  Because his immune system will be taken down to nothing, he’ll have to be completely quarantined from anywhere from 14-30 days.  We’ll have to figure out the details in the weeks to come but this will likely involve an in-patient stay at the hospital because how realistic is a quarantine-level cleanness at home with kids, school, and cold-and-flu season in the mix?

So there we have it.

Again with the we.

Man, this is one massive hurdle (in this upside down existence in a right side up world) that I’d give anything to let someone else jump over.

2 thoughts on “Let’s Get Crackin’”